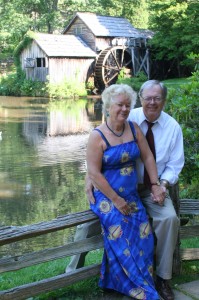 Roger and Beth Briggs (the founders of HFH) met and married while attending the University of North Carolina School of Dentistry. After graduation in 1975 they moved to the mountians of western North Carolina to open and operate a busy dental practice in Hayesville for 17 years.  During this time the Lord began to work mightily in the hearts of Roger and Beth, calling them into a closer relationship with Him and giving them a heart for the lost. In January of 1985, after three of their four children were born, they began doing dental mission trips to the Mayans of the Central Highlands of Guatemala.  Six years, and many trips later they moved to Dallas, Texas to attend Christ for the Nations Institute in order to prepare for living in Guatemala as dental missionaries.  In 1992 the Briggs family of six moved to Guatemala and began Hearts for Heaven.  The ministry has grown to include feeding centers for children, Bible teacher training, preschools, relief projects, publication of weekly children's Bible study materials, and most recently a technical school.  Through the years they have hosted many short term mission teams which have helped develop these ministries.

Roger & Beth moved back to Charlotte, NC in 2005 to manage the ministry and be near family.  Roger  passed away in October of 2015.   Beth is now the Development Director for the ministry and would love to share with you and your church what the Lord has been doing through Hearts for Heaven.  Beth has four grown children: John, Rachel, Rebekah and Sarah, and five grandchildren: Elsa, Asher, Amos, Josiah and Seth.   She also is very committed to translating for the Women's Crisis Center in Charlotte and working in her local church. 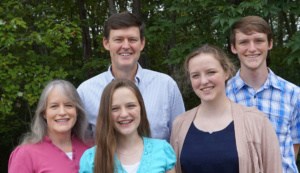 .  He received his MA in English Bible from Columbia International University in 1995, and has been a bi-vocational Baptist youth pastor or pastor since then.  He has been deeply influenced by the Briggs throughout his life and has followed and supported their work through the years.  Becky, Kevin, and their three wonderful kids were missionaries with Hearts for Heaven and lived in Guatemala for over three years from 2008 through 2011.

Since returning to the states, he has worked as a clerk in the Clay County Clerk of Court's office and pastored Pinelog Baptist Church.  He has been feeling lead to help Hearts for Heaven, but wasn't sure how until Beth mentioned retiring at a board meeting in 2017.  After praying and consulting others, he felt lead to help keep the ministry moving ahead.  He recently resigned from the Clerk's office, (but not the church) in order to serve in leadership of Hearts For Heaven full time. 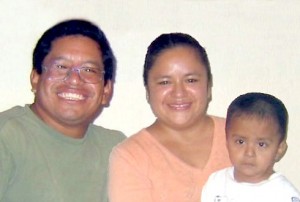 Oscar is our National Director and is a very enthusiastic Christian who loves the Lord and enjoys helping the poorest of Guatemala (a condition he was all too familiar with as a child).  He is a welder, mason, and general contractor and has been developing skills in children's ministry and pastoral care. In fact Oscar and Telma both recently graduated from a three year Children Educator's Program.

Oscar's delightful wife, Telma, is the director of the feeding center at La Primavera. She is also very involved in most aspects of the daily operation of the ministry and is a very valuable resource for helping us reach out with compassion to the kids of Guatemala.

Oscar and Telma have one son, Jonathan, who is almost 9 years old.

Pastor Hugo is the pastor of the church in San Antonio Buena Vista where our second feeding center is located.  His wife Dora is the director of this feeding center 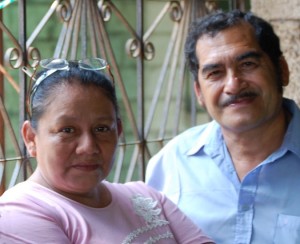 .  They felt called to move to this rural area to build a church and minister the gospel.  The children of this community were initially extremely shy and skeptical of outsiders.  Since the feeding center was built and many families have been assisted, the children (and parents) are beginning to open up to the hope of Christ.  When we visit this isolated village, Pastor Hugo will often be found up in the hills walking door to door checking on the sick and poor in his community.